Tax on Fuels: Transport fuels are generally taxed heavily in most of the countries. Primarily for generating steady revenue at a low cost of collection. Sometimes the additional tax is levied for specific purposes, e.g. road construction or other infrastructure, etc. But fuels, being an essential commodity, leads to a rise in its prices which has a direct impact on individuals (more prominent of farmers and poor), industry, and on the economy as a whole.

Optimal Taxation Time to time, the issue of optimal taxation of commodities, including fuels, has been examined by scholars. Ramsey (1927) showed that in order to raise a given amount of revenue at the lowest cost, higher Tax rates should be imposed on goods for which demand is inelastic (not sensitive) to the price increase, with a relatively lower tax on goods having elastic demand (sensitive) to increase in prices (the so-called Ramsey rule). The flip side of the theory is that many inelastic goods (e.g.energy) may represent a large consumption by low-income families, and implementing the rule may create equity concern and require offsetting measures. The petrol consumption pattern in India is a good example, 60% of the total volume consumed by two-wheeler owners in India.

In a contrarian view, Diamond Mirrlees's (1971) production efficiency theorem indicates that taxes should be imposed on the final consumption of goods and services. The rationale is that any distortion of production decisions reduces aggregate output, which cannot be wise so long as there is some useful purpose to which output could be put. An optimal tax structure should not include intermediate goods tax structure since it would prevent efficiency. In the Indian context, this issue is addressed by GST input or cenvat/modvat input except for transport fuels which are exempted from cenvat/modvat or GST input. It may be because transport fuels are generally not major direct input to industry. But it’s a major indirect input to the industry because any input or output to the industry is subjected to multiple transportations, therefore, taxes on transport fuel are finally reflected in the final output as a major component.

Optimal Commodity tax rates also need to take into account the impact on the labor market. Commodity taxes push up commodity prices and thereby reduce the consumption value of wages (meaning that fewer goods can be purchased with a given wage). By reducing reward from working discourages labor efforts. Reduced consumption capacity of individuals, due to the rise in prices, impacts production due to a reduction in consumption.

The policy of differential taxation e.g taxing road transport fuels more than fuels used by industry or agriculture or aviation sector is also prevalent in many countries. However, the administration of differential taxation is supposed to be difficult to practice therefore uniform taxation policy is recommended. In India, transport fuels are taxed uniformly across all sectors hence not relevant.

Tax structure in OECD countries: A study of taxation patterns in 34 OECD countries showed that the highest tax rates apply in the transport fuel sector. Many countries have adopted differential taxation means low or nil taxes are imposed on the fuels consumed by the process industry, agriculture, or railways, and road transport fuels are taxed highest. Among OECD countries level of tax and structure both vary from country to country.

Taxes on transport fuels are significantly higher in European countries. Taxes in European Union members (21 member countries) is governed by Energy Taxation Directive (2003) which sets a minimum level of tax for different fuels including sector-specific levels for member countries. Pl refer the Graph 1 below: 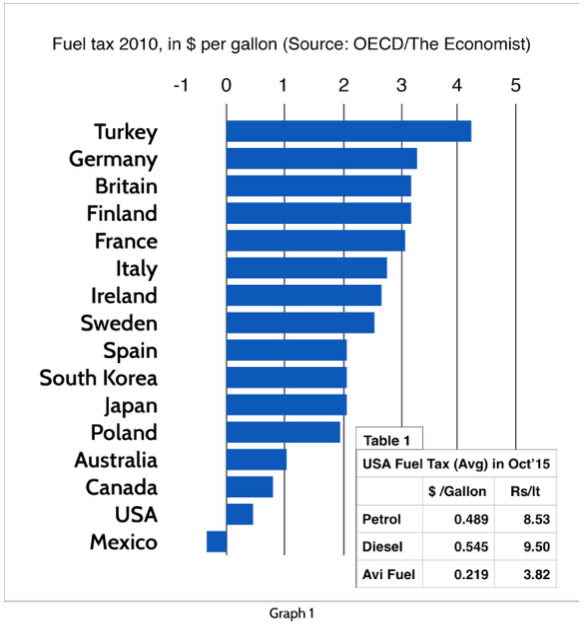 Indian Tax Structure: Salient features of taxation in India on transport fuels can be summarised below:

An increase in transport fuel prices impacts every individual because transportation is an essential input for every commodity and service consumed by them. It reduces their consumption capacity.

Industrial output also becomes costly because of input or output to any industry undergoes multiple transportations before it's converted into consumable goods. Industrial wage also increases because living as well as the transportation costs of an individual increase.

Cultivation becomes costly because of transportation cost of agricultural input and output increases. Since farmers do not have any compensation mechanism towards a rise in the cost of input and their return depends purely on prices of agricultural output, their net income or consumption capacity also reduces.

In short high fuel prices impact, everybody and the worst affected is the government itself.

While the rise in international prices is fait accompli and it impacts all fuel importing countries equally hence does not impact global competitiveness significantly but high taxes on transport fuels severely affect global competitiveness due to the high cost of domestic production. It leads to a decrease in exports, affecting BOP (balance of payment) due to a decrease in export income. High BOP pushup forex rates which further impacts fuel rates because India is dependent on imported fuels. It turns into a vicious loop.

A high incidence of taxes on transport fuels for generating revenue puts the economy into a self-defeating loop. Fuels should be taxed moderately. It is more prudent to tax consumption rather than fuels. High tax on fuels impacts every individual, industry, railways, agriculture and the worst affected is the government. A moderate tax on transport fuels for all sectors shall promote consumption by the poor as well which will give more positive growth to the economy.